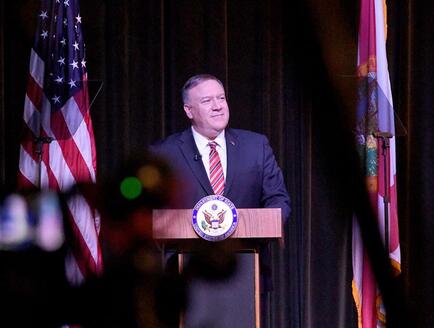 U.S. Secretary of State Mike Pompeo speaks Thursday at the Sumter County Fairgrounds in Bushnell, where the audience gave him a standing ovation. Earlier in the day, Pompeo visited Miami. Cindy Skop, Daily Sun
‘America will prevail,’ Pompeo tells crowd
By AlexANDria Mansfield, Daily Sun Staff Writer  The best investment advice he ever received, U.S. Secretary of State Mike Pompeo said, was to never bet against America. “America will prevail,” Pompeo said. “We should all bet on our nation.” Those words brought cheers Thursday during Pompeo’s appearance at the Sumter County Fairgrounds in Bushnell. Roughly 700 spectators, most of them Villagers, listened as he spoke about his role as America’s top diplomat and the work his boss, President Donald Trump, is doing to keep the nation safe. Coming three months after Trump’s visit to The Villages and two months before the state’s presidential preference primary, Pompeo’s stop underscored the importance of Sumter and Florida to the president’s reelection effort this year.
More visits by the president’s team and other top Republicans are likely throughout the campaign to Election Day.
Sumter County and The Villages lie on the edge of the all-important Interstate 4 corridor, the voter-rich area from Tampa to Daytona Beach that politicians consider key to victory in the state. Sumter has about 56,000 registered Republicans and, during the 2016 presidential election, Trump easily won the county.
That support was on view at the fairgrounds, where the crowd greeted Pompeo with a standing ovation and chants of “U-S-A” and “four more years.”
The former Kansas congressman and director of the Central Intelligence Agency took the stage a little after 4 p.m. and spoke for about 15 minutes on foreign policy — briefly touching on abortion and socialism — and the president’s plans for the country.
Pompeo said his mission in the Trump administration is “to make the world safer so we don’t have to send young men and women off to fight.”
When he visits other nations, people line the streets, he said — “not because he’s Mike,” but because he’s representing the U.S., he said.
“For too long, we weren’t winning,” Pompeo said. “Now we have a president who’s getting it done. Is anyone tired of winning yet?”
A chorus of “no” answered his question.
Pompeo arrived in Bushnell from Miami, where he participated in a round-table discussion with representatives of South Florida’s Venezuelan community. The session, hosted by Florida Gov. Ron DeSantis, was closed to reporters.
Latin American political unrest has dominated the secretary’s itinerary in recent days. On Monday in Bogotá, Colombia, Pompeo met with Juan Guaidó, the Venezuelan politician, hoping to unseat Venezuelan President Nicolas Maduro, who the secretary of state described Thursday as “running something that looks more like a drug cartel than a real government.”
He also expressed the nation’s dissatisfaction with Nicaraguan President Daniel Ortega and his hopes for free elections in that country, where protests have resulted in hundreds of deaths at the hands of the government. The Florida Senate passed a resolution this week condemning Ortega and detailing how protesters have been arrested and tortured.
Thursday’s event at the fairgrounds was organized by the Sumter County Republican Executive Committee and hosted by the Sumter County Teen Court, a program in which first-time juvenile defendants have their cases reviewed by a jury of their peers.
The group put out about 720 chairs for guests, according to Erin Munz, Sumter County Teen Court coordinator, and almost all of the seats were filled by the time Pompeo arrived to speak.
Steve Printz, Sumter County commissioner, said he was thrilled that Pompeo was gracious enough to want to stop in Sumter and talk about the State Department.
“I hope it’s because he recognizes that we’re critical to the long-term success of this state,” Printz said, “and being able to provide a solid block of support for this president.”
Jerry Prince, president of The Villages Republican Club, said he thought the speech went well.
“He’s a dynamic guy,” Prince said.
After completing his remarks, Pompeo received another standing ovation, then spent about 15 minutes shaking hands before leaving.
Nine-year-old Shaylyn Stafford, of Bushnell, said she was excited to meet the secretary of state because he was an important person who was going to make things better.
After having her picture taken with Pompeo, she ran over to her mom, Kara Stafford, and expressed her excitement at having the opportunity to pose with a “famous person.”
Staff writer Alexandria Mansfield can be reached at 352-753-1119, ext. 5401, or alexandria.mansfield@thevillagesmedia.com
http://ms1.bigvproductions.com:1935/studio/channel1776bonair/playlist.m3u8
TVCM/TVTP Release form click here
Your SEO optimized title page contents