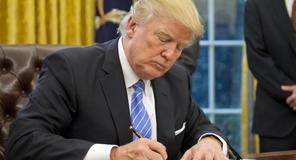 PRESIDENT TRUMP OFF TO A GOOD START PROTECTING THE LIVES OF THE UNBORN
January 27, 2017 by John Ellis

Leading up to the election, several people whom I admire and respect argued that Christians should vote for Donald Trump because of Roe v. Wade. I argued that if Trump were actually pro-life, they might have a point. I mean, they were arguing for a guy who has publicly praised Planned Parenthood and who talked about appointing his pro-abortion sister to the Supreme Court. Trump’s pro-life supporters claimed that his position had shifted. I claimed that they were being conned. Turns out that they may have been right and I may have been wrong. Egg on my face, I guess?
If there is egg on my face, I’ll happily accept it. The holocaust called abortion is the greatest evil of our society. With the number of babies that our nation has murdered rising on a daily basis, we very well may have surpassed the vileness and wickedness of the ancient Canaanites whom God destroyed because they sacrificed their children to the false god Molech. I weep over the selfish and demonic slaughter of babies who are still living inside what is supposed to be the safest of safe places, their mother’s womb. I pray daily for God to put an end to our society’s sacrifice of our children on the altar of the self-fulfilled individual. Thankfully, President Trump appears to be committed to doing just that—putting an end to our country’s sanctioning of abortion.
President Trump’s first few days in office have been a whirlwind. That violent jolt we all felt was the abrupt U-turn this country took on January 20. The frequent shudders and bumps that we continue to feel are being caused by the petulant temper tantrums of the left. Regardless of a person’s overall opinion of President Trump, no one can legitimately claim that he has been lazy. After one week in office, I would imagine that he goes to sleep at night with cramps in his writing hand—assuming that he takes the time to sleep, that is.
Some of the things that President Trump has done, I like. Some, I don’t, at all. Other decisions from the White House live in the realm of “no opinion” for me. But all those are conversations for another day, because out of everything that he’s accomplished, President Trump’s reinstatement of the Mexico City Policy has been the decision out of the Oval Office that has prompted the biggest response from me—one of joy and thankfulness.
Poll: 83% of Americans Back Trump Reversal of Obama’s Overseas Abortion FundingBriefly, the Mexico City Policy prohibits federal dollars (translation: taxpayer dollars) from going to international health organizations that perform or even promote abortion. President Reagan enacted the policy in 1984 and every subsequent Republican president has enforced it. Every subsequent Democrat president has rescinded the Mexico City Policy and has funneled money from this country to help pay for the murder of babies. Keeping in line with the previous presidents who opposed the murder of babies, President Trump reinstated the policy earlier this week.
Some might say that this was a very low pro-life bar for our new president to hurdle. Maybe. If there are low bars when it comes to saving the lives of babies, that is one of them. But honestly, a few weeks ago, I would’ve shaken my head incredulously at the suggestion that one of President Trump’s first actions upon taking office would’ve been a pro-life measure.
Coupled with Congress voting to permanently ban women in the country from receiving federal financial aid for abortion, President Trump’s reinstatement of the Mexico City Policy gives me much hope. And I’m not the only one.
Noted #NeverTrumper Russell Moore praised the president’s decision and added, “This is a welcome step in the right direction, and my hope is that the President will continue to defend human dignity and hold the predatory abortion industry accountable.”
I, too, pray that President Trump will continue to defend the rights of unborn humans, and I eagerly await to hear who will be his first dedicatedly pro-life nominee to the Supreme Court. I will also happily take more egg to the face if he continues to prove me wrong about his stance toward abortion.
Source: PJMedia
​_______________________________________________________________