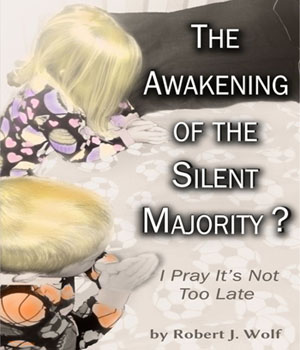 
​WILL WE BE PROUD OF THE AMERICA WE LEAVE TO OUR GRANDCHILDREN?

​Every chapter in my book "The Awakening Of The Silent Majority?" "I Pray It Is Not Too Late" asks this question, either directly or indirectly.  If we, the silent majority, remain silent for another generation it will be too late.
Will we continue to allow the death and maiming of more brave young men and women in our armed forces to preserve the flow of cheap energy from the Middle East?  Every year we send hundreds of billions of dollars to countries who fund an enemy intent on destroying us.  We don't have to.
(Click here to view the Book)

We have silently sent an increasing amount of our paychecks to fund a Social Security system that has, for decades, been used as a slush fund to reelect members of Congress.  Why do we continue to allow that to happen?
Should honest Americans be resolved to the fact that our democratic process is slowly being stolen from us?  Multiple forms of voter fraud threaten to create a ruling class that cannot be removed from office.  We can regain control of the voting process.  Is the future of our Republic worth the effort?
The ultra rich can hire teams of accountants and attorneys to legally avoid paying taxes.  Those at the other end of the income spectrum pay no taxes. There is a cadre of Americans who cheat by not reporting income.  Those involved in the "underground economy" avoid paying taxes.  The tax system in the U.S. is so badly flawed that it cannot be repaired.  It must be scrapped. Everyone benefitting from the services provided by the government, in other words everyone, should help pay for those services. There is a system that requires the involvement of every American.  It is time to abolish the IRS and adopt the FairTax plan.
The national debt, welfare, education, and other problems will also be discussed in the book.  It doesn't take a degree from an Ivy League school to remedy most of the problems facing our country.  It will take courage and a love of the country that few politicians have displayed.
The silent majority needs to step up and lead the way.
Together we can make it happen.  Please read on.  Lets R.O.A.R!
Your SEO optimized title page contents