Classic Distraction (from a Corrupt Media and Compromised Intelligence Community)
by KEVIN D. FREEMAN on APRIL 20, 2019 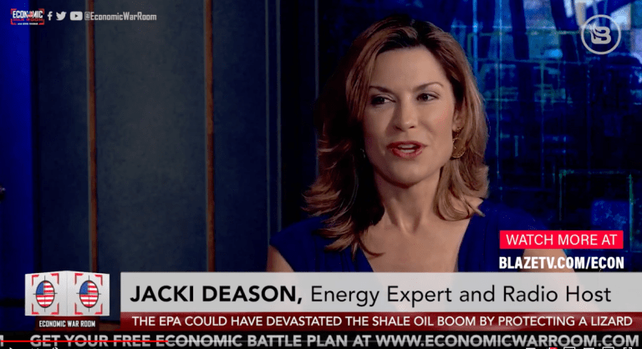 Energy Wars and a New Threat to the Petrodollar
by KEVIN D. FREEMAN on APRIL 6, 2019

Share this...In the current episode of Economic War Room, we discuss the energy war among other topics with Jacki Deason. We cover the American Shale Revolution and its impact on Russia, the Middle East, and Latin America. It’s a great episode and well worth watching. You can access a FREE trial and our Economic Battle Plan™ at our website. Jacki is an expert in multiple areas, including energy, our government, and the national debt. Better still, she understands concrete solutions.
There should be no doubt that our emerging energy independence is shaking up the world. We are now seeing a response. As we have warned multiple times before, the next attack on America may be an attempt to destroy the petrodollar. Now, we learn of a very direct Saudi threat to do just that.
From Reuters:

Exclusive: Saudi Arabia threatens to ditch dollar oil trades to stop ‘NOPEC’ – sources
​April 4, 2019
LONDON/DUBAI (Reuters) – Saudi Arabia is threatening to sell its oil in currencies other than the dollar if Washington passes a bill exposing OPEC members to U.S. antitrust lawsuits, three sources familiar with Saudi energy policy said.
They said the option had been discussed internally by senior Saudi energy officials in recent months. Two of the sources said the plan had been discussed with OPEC members and one source briefed on Saudi oil policy said Riyadh had also communicated the threat to senior U.S. energy officials.
The chances of the U.S. bill known as NOPEC coming into force are slim and Saudi Arabia would be unlikely to follow through, but the fact Riyadh is considering such a drastic step is a sign of the kingdom’s annoyance about potential U.S. legal challenges to OPEC.
In the unlikely event Riyadh were to ditch the dollar, it would undermine the its status as the world’s main reserve currency, reduce Washington’s clout in global trade and weaken its ability to enforce sanctions on nation states.
“The Saudis know they have the dollar as the nuclear option,” one of the sources familiar with the matter said.
“The Saudis say: let the Americans pass NOPEC and it would be the U.S. economy that would fall apart,” another source said….
To READ MORE:  REUTERS Exclusive: Saudi Arabia threatens to ditch dollar…
The Saudis understand the potential threat to their oil empire. They are basically saying they will upend the global economy’s Monopoly board if threatened. And I do not believe their responsive threat is idle.
The good news? It shows we are no longer under Saudi oil dependence. The bad? We better shore up our dependence on foreign capital by reducing our debt.
Watch a clip from the show with Jacki Deason here. In this clip, it becomes obvious just how important American Energy production has become.

There are solutions! If you want to learn what you can do and what America should do, just register to receive our FREE Economic Battle Plans™ at our website. 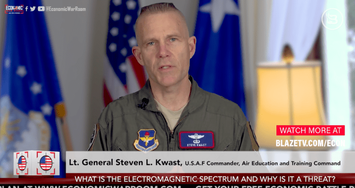 Beware the Science Deniers (and listen to those who want to defend us)
by KEVIN D. FREEMAN on APRIL 28, 2019
Share this...
Before you think we’ve gone overboard with warnings of climate change, please understand that today’s blog is about scientific fact that has been extremely well documented for more than half a century. The fact is that our electric grid, and really anything unshielded with a computer chip, is vulnerable to Electromagnetic Pulse (EMP). This is not science fiction. It is science fact. Episode 22 of Economic War Room covered this subject including interviews with Lt. General Steven Kwast, Major David Stuckenberg, and former Director of Central Intelligence Jim Woolsey. [If you are not a subscriber to BlazeTV, get a FREE MONTH TRIAL and a discount starting at EconomicWarRoom.com.] You can view a YouTube clip here.

A relatively small thermonuclear device at the right altitude could cause a cascade of grid failures that could wipe out multiple large-scale transformers. It is also a fact that we no longer produce these domestically and would have to ship them in from overseas. The lead time can be one-year or longer. We do not stockpile these. Also, it is a scientific consensus that an electric grid failure of a year or more would be devastating to our nation. Some estimate as many as 90% of the American population would die under such a circumstance. Finally, it is fact that many (more like most really) of our enemies and adversaries have threat doctrines that include using EMP weaponry against America. All of this is extremely well documented at SecuretheGrid.com. We’ve covered it in this blog multiple times as well.
The problem is that we have a serious “science denial” by the very industry that is threatened.Now I’m not suggesting that everyone in the electric utility industry is arrogant, corrupt, and ignorant. But I have seen with my own eyes the extreme effort by some key players to avoid any scrutiny or oversight. I testified for an EMP-protection bill in the Texas legislature a few years ago and the power industry came out swinging. They denied any risk in public. In private conversations, however, they admitted that there were very real risks but dismissed addressing them with “if there’s an EMP, we are all screwed anyway” and “we couldn’t restart after an EMP because there would be no power demand to rebuild upon.”
This floored me. We have the Chinese, Russians, North Koreans, and Iranians all discussing using super-EMP weapons against America. We know the science is 100% valid and proven both in experience and the scientific literature. And, we know that our adversaries have explored the concept of destroying our electric grid by multiple means. Finally, we know we have the capability to mitigate against disaster. It doesn’t have to be outrageously expensive (unlike proposed efforts to offset the less proven risks of climate change) and we have the technology. So what is the problem?
There is a major battle brewing over the fact that the President of the United States issued an Executive Order requiring that EMP be addressed. Call it an “E.O. Showdown.” On one side we have the military and EMP experts. On the other, we have a lobby group for power companies willing to do whatever it takes to avoid accountability in this matter. PREPARE YOURSELF for an onslaught of Junk Science determined to tell you that “there’s nothing to see here.” Don’t buy it.
I am honored to be attending the 2019 Electromagnetic Defense Task Force Summit this week as reported in Air Force Magazine. Here are excerpts from their report:
Air University to Host Second Electromagnetic Defense Summit4/19/2019​—RACHEL S. COHEN
​As the Air Force begins to put the lessons it learned from a yearlong study of electromagnetic spectrum dominance into practice, an Air University-led team’s second annual summit this month promises to continue shaping how the government sees the emerging domain.
Up to 300 participants from across and outside of the government are expected to attend this year’s Electromagnetic Defense Task Force gathering April 29-May 1, Maj. David Stuckenberg, one of the authors of the task force’s inaugural report, told Air Force Magazine. They will also run a wargame shaped in part by Vice Chairman of the Joint Chiefs of Staff USAF Gen. Paul Selva.
“A number of challenges were identified in the first EDTF report … and so we are continuing to do assessments on how to close the door to certain vulnerabilities,” Stuckenberg said. “We’re looking at various strategies for … mitigation of areas that are maybe not yet identified. We’re looking at how to continue developing expertise and also what kinds of areas that we need to potentially test.”
According to the November 2018 Air University report, the US needs a Manhattan Project-like effort to protect nuclear power sources, installation command posts, and critical equipment; improve training and management; be the leader in 5G technologies and networks; and understand the physical and biological effects of electromagnetic pulses and related attacks . . .
Last month, President Donald Trump signed an executive order that, among other directions, told the Defense Secretary to strengthen nuclear nonproliferation and deterrence efforts to shrink the likelihood of an EMP attack. It includes EMPs in planning scenarios, work with others to be able to warn about EMPs and characterize their effects on military systems, and defend against them when detected.
DOD must also update the President every two years on infrastructure resilience against EMPs.
[TO CONTINUE READING:  AIR FORCE MAGAZINE]
So, as I’m preparing to take part in a summit with the best scientists and military minds on this critical issue, we learn of an industry-led science-denial effort that will come out coincidently with the launch of the summit. The good news? The true experts are aware of the forthcoming report and preparing a solid rebuttal to it. What you need to know is that rumor has it that this industry report will follow a junk-science approach using hypothetical simulations and models that pale in comparison to the detailed military versions.
What I find so sad about this is that the same people who have been preaching fear of global warming (I guess now called climate change since Chicago had so much late-season snow this week) with questionable climate models would now tell you to deny the very real science of EMP and the risks posed therein. They do so simply because they want to avoid accountability and remain self-regulated. With the stakes this high, we cannot let them do so. These are the actual science deniers. Stay Tuned.
Your SEO optimized title page contents