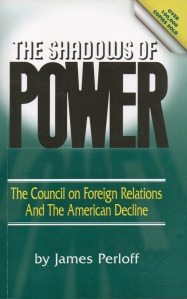 THE SHADOWS OF POWER The Council on Foreign Relations and The American Decline
​
The Shadows of Power (1988) is the forerunner of Truth Is a Lonely Warrior. It documents the history of the Council on Foreign Relations (CFR), and its control of U.S. foreign policy and Presidential cabinets through that of Ronald Reagan.
Truth Is a Lonely Warrior is far more up-to-date and comprehensively depicts the broad global hierarchy of which the CFR is one component — the U.S. foreign policy branch.
The Shadows of Power, which has sold over 100,000 copies, remains a key resource for understanding the march of 20th century American history.
Early Praise for the Book“An eye-opening account of a private group that has helped shift American foreign policy away from America’s best interests. Highly recommended.” — David B. Funderburk, former U.S. Ambassador to Romania
“Policies linked to the organization described in this book have helped visit a number of tragedies on the free world. There may be more forthcoming. James Perloff has cut through a litany of myths to bring out the facts. To not read this book is to live dangerously.” — Philip Crane, United States Congressman
“If we want to avoid the disaster of one-world government, if we wish to preserve our priceless national sovereignty and live through all time as free men, then it is imperative that the American people read The Shadows of Power.” — Meldrim Thomson, Jr., Governor of New Hampshire (1973-1979)
“There have been many books purporting to explain the ‘real’ reasons for what happened to us in Vietnam. Unfortunately, most of these have been part of the same old smokescreen from the actual architect of the war, the American Establishment. Our veterans deserve more than memorials – they deserve the truth. Here at last is a book where they can find it.” — Andrew Gatsis, Brigadier General, U.S. Army (Ret.)
The Shadows of Power still sells for around $10 (its original 1988 price) and may be purchased through Amazon or by calling 1-800-342-6491.
Your SEO optimized title page contents