May 6th - Join Us for a Special Event  - Expose the Weathermen

Re-release of Larry Grathwohl’s .. blockbuster 1976 expose on the Weathermen

Tina Trent (the Soros Files) brings author Larry Grathwohl  to speak about the Weather Underground’s violent past and their current roles as influential political and academic activists with ties to the White House and to K – 12 educational “reform,” including the Common Core movement.

The Weather Underground: 45 Years of War Against America . . . and counting

Tina Trent is a popular speaker on the Florida Tea Party circuit.  She writes about crime, George Soros, and the influence of Sixties radicals on politics, academia, and the criminal justice system. She will be speaking about Bill Ayers’ “second” career as a national leader in a radical movement to transform K – 12 education by turning schools into training camps for “social justice” activism.

Copies of "Bringing Down America" will be available for sale.  The book has recently been featured on the Wilkow Show on Blaze TV. 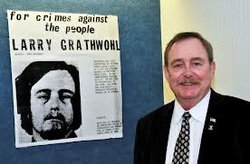 Larry Grathwohl, the only person to infiltrate the Weather Underground for the Federal Bureau of Investigation (FBI), has passed away. He was in his late sixties and the cause of death has not been released, but those of us close to him suspect natural causes.Grathwohl was a friend to many in conservative political movements, including me. Left-of-center political groups generally shunned him for helping law enforcement stop the violence and terrorist acts of the Weather Underground, a group Hollywood and liberals have granted deity status in recent years.

He returned from Vietnam and worked on a loading dock in Cincinnati when he encountered two Weatherman members handing out flyers for a protest that would turn out to be the now-infamous Chicago Days of Rage.

Grathwohl went to a former police officer he knew and expressed his concerns over potential violence against law enforcement officers. Shortly afterwards, he was recruited by the FBI.

He ultimately infiltrated the Weatherman movement and continued to serve in an undercover capacity when the group later became the Weather Underground. Grathwohl helped prevent numerous bombings, including an intended series of attacks in Detroit allegedly masterminded by Bill Ayers.

Grathwohl has been a hero and big brother to many who have served in an undercover capacity in the FBI’s Human Source Program, often calling to chat and make sure the dangers associated with the service were not having a negative effect on our lives and our relationships to people we loved.

Tina Trent, a close friend of Grathwohl’s, released this statement:

Larry made the type of sacrifice most people can't understand. He was a very young man, and a young father, and he had just gotten back from Vietnam, and he signed up again to protect America from idiot Marxist terrorists like Bill Ayers and Bernardine Dohrn who were trying to murder policemen and soldiers.

The thing about Larry that I loved the most was how he wanted to protect people. Here he was, undercover in this violent communist cult, and the Weathermen were trying to get the women to give up their children to foster care so they could "commit themselves to the revolution." Larry wanted to save them. He wanted to save Diana Oughton, and he could not. He was almost a decade younger than the Weathermen leaders, but he was a man and they were psychotic children.

Trent also noted that Grathwohl was about a decade younger than the leadership of the Weathermen and lacked the advanced degrees that many of them held. Still, he managed to infiltrate and recognize the threat they posed to our nation. Many of the predictions and fears from his writings have come to pass, and today the former leaders of the Weathermen enjoy positions of high authority in society.