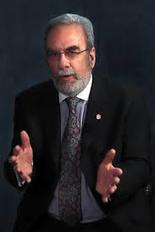 Michael Cutler
Michael Cutler graduated from Brooklyn College of the City University of New York with a B.A. in Communications Arts and Sciences.

He is a retired Senior Special Agent of the former INS (Immigration and Naturalization Service).  His career which began in 1971 spanned some 30 years.  He began his career as an Immigration Inspector, served as an Adjudications Officer and, in 1975, became a Special Agent.  He rotated through every squad in the Investigations Branch of the INS in New York City.  In 1988 he became the first INS agent to be assigned to the Unified Intelligence Division of the DEA and in 1991 was promoted to the position of Senior Special Agent and assigned to the Organized Crime, Drug Enforcement Task Force.  He worked with local, state and federal law enforcement agencies including the DEA, FBI, ATF, U.S. Marshals Service and with law enforcement agencies of other countries including Israel, Canada, Great Britain and Japan.

He has testified before well over a dozen Congressional hearings in both the U.S. House of Representatives and the U.S. Senate.  He most recently testified before a hearing conducted by the Senate Judiciary Committee on March 20, 2013 on the topic:

He provided testimony to the 9/11 Commission and has testified before numerous state legislative hearings in many states including New York, Maryland, Texas and Indiana.  He provided assistance to the law firm retained by Arizona's Governor Jan Brewer to defend her and her state against the DOJ lawsuit filed in response to the enactment of Arizona's immigration law, SB 1070.  He also provides expert witness testimony at trials where immigration is at issue. 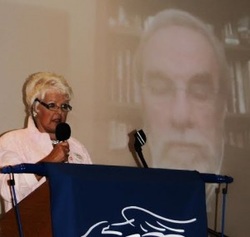 Villages Tea Party President Aileen Milton with an image of speaker Michael Cutler in the background.

Aileen Milton, president of The Villages Tea Party, and her crew, said they searched far and wide for over a year to find a qualified expert to speak about immigration. At the Savannah Center , as Michael W. Cutler delivered his talk entitled‘Immigration: Disaster in America’ from New York via SKYPE,  it was immediately evident a very well versed expert was at the podium.

Cutler, a registered Democrat, was highly critical of immigration in America — and blamed “the open borders crowd” in both political parties for the mess we are in. Cutler called it a national security nightmare, and believes elected officials in both parties, prompted by special interest groups, have permitted the non-enforcement of our existing laws in order have a steady supply of cheap labor. “The immigration anarchists in our government,” Cutler said, “have permitted highly skilled foreign workers to drag down salary levels and take positions from American workers at a time when so many middle class Americans are unemployed. Some politicians justify this in terms of income equality,” he continued, “but it makes no sense. it sounds like communism to me.”

Cutler warned many Americans believe our border states are the most vulnerable, and our coastlines as well — but he asserted all fifty states with international airports are wide-open portals for illegal, undocumented and uninspected aliens to enter our country undetected. “Immigration is a system, not just the Mexican border. The system is broken. It has holes in it all over the place. How many holes does a boat need to make it sink?” he asked. “Only one! Israel understands this — America doesn’t get it!”

Cutler said we need to monitor and police who is arriving here to keep out communicable diseases, like polio and Middle Eastern Respiratory Syndrome. “This is not about race, religion or ethnicity. Our elected officials act like they have IQs somewhere between a radish and a cucumber,” he said. “We must bar criminals, previously deported persons, money launderers, foreign spies, and those who come here with no resources to drain our welfare and healthcare systems.”

“Illegal aliens can apply for documentation by mail, without an interview or meaningful background check. This is national suicide,” Cutler said, “but the court jesters in Washington call it compassion. This is about the looting of America and the dismantling of America. Campaign contributions direct our government decisions,” Cutler said angrily.

“Average Americans spend their spare time watching Dancing with the Stars and ignore what our elected officials are doing,” he continued. “Our politicians work for us, and many of them are insubordinate employees. They need to be fired. The difference between a legal immigrant and an illegal alien,” Cutler remarked, “is the difference between a house guest and a burglar. One comes in the front door with your invitation. The other crawls through your back window at 3:00 AM.”

Cutler urged citizens to become activists. “Be in the politicians faces,” he pleaded..”Cut away the foliage they hide behind, and share this information with everyone you know. If politicians are not doing their job, don’t keep sending them back to Washington.” Cutler ended his question and answer session with the admonition: “Money and power motivate many politicians — those are the two elixirs of politics.”