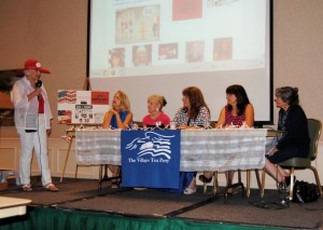 Aileen Milton, president of The Villages Tea Party, celebrated the group’s second anniversary Monday night at the Savannah Center by thanking members and guests for their support. “Our membership has grown sharply; we’ve had really interesting speakers and we’ve expanded our outreach via live video streaming,” Milton said with pride.

A panel of five successful women provided a lively discussion of conservative ideas, spotlighting the need to address our younger population, including students and stay-at-home parents. America has the greatest representative government in the world,” said former Congressional staffer Elizabeth Letchworth, of GradeGov.com. They are little dysfunctional now, and we need to let them know what we are thinking.”

Laurie Newsom, from the Gainesville Tea Party, who co-owns an outpatient surgical center with her husband, wants the federal government to stay out of our personal lives — out of our schools, school meals and core curricula; and out of our social and religious lives. “We want them instead to focus on economic issues and our open borders, which impact all Americans negatively.”

“Hillary Clinton said it takes a Village to raise our children,” Letchworth added. “That’s just not true. It takes good parents. We need to revitalize marriage in the white, Hispanic and black communities. Broken homes lead to poverty and government dependency.”

A professional industrial engineer, Karen Jaroch of Heritage Action, discussed how she believes left-wing progressives are promoting a culture of victimization. “Anyone can be a victim — things aren’t ever fair. There are no losers — today, children always have to win, even when they don’t. We need to take every opportunity to help our kids and grandkids be strong, self-reliant adults. We need to show them the truth behind this ‘theater’ we are currently living. We need to raise our expectations and stop coddling our young people.”

Panelist Cindy Youell, of the greater Orlando Tea Party, believes women who rock the cradles can rule the world. “Our society has devalued motherhood,” Youell said. “and what better job is there than teaching children good values and empowering them with self-confidence? Someone needs to raise the children — it’s not the government or the teachers — it’s the parents.”

“As long as the government is setting the stage for our society, we will have problems,” Barbara Hazelden asserted. She believes modern progressives unduly prolong childhood, enabling youngsters to remain perpetually dependent. “When does a child become an adult?” she asked. “Young adults age 26 are listed as ‘children’ on their parents’ health insurance policies. When do we cut them loose to be self-supporting, responsible adults?”

Youell doesn’t believe we are helping our kids by giving them everything. “Instant gratification is not a good blueprint for life,” she said. “We shouldn’t give kids new cars when they graduate. They should have to work and save for them, to instill positive values.” She also believes we are facing a war on morality. “Our government has taken God out of our lives,” she said. “When we return to the God-root, our morality will grow again. And we need to reform our welfare system,” she added. “There needs to be a work requirement for any handouts. This administration has made poverty comfortable — there is little incentive to work. Until we change Congress, this will not change.”

“We have made women slaves to the government’s welfare system by giving them housing, food stamps and checks — it’s all about control and votes,” Jaroch believes. “They’ve taken the stigma out of being dependent. By doling out government checks, we have also supplanted the role of the father, who used to be the bedrock of our families.  Men have also been devalued in our society.”

The panelists realize our younger generation is overburdened with work, housekeeping, debt and raising families — but they hope to see young parents espouse conservative values by participating in their communities — on school boards and county forums. They also hope to see conservative seniors play a role in helping to educate their grandchildren in civics and responsible behaviors, They encourage conservatives to reach people 18-25 ‘wherever they will listen and absorb new ideas. “They need to be on Facebook, Twitter and other social media; via comedy shows and YouTube, which is entertaining and can go viral.”

The women want to see more ‘God dependency’ and less ‘government dependency.’ They want to see our borders closed and the recent flood of unaccompanied minors turned over to an international agency for re-location or adoption. They believe if we continue to play into the welfare state, we will all become victims… but if we teach our young people to value their gifts and talents, they will find a way to achieve success in life.