The NSIC Institute will work to bring together national security and investment professionals in order to protect the American economy, improve investor results, and enhance national security.

Our enemies perceive our military as too strong to threaten, so they have developed methodologies to target our economy with direct and threading implications for investors. Anyone charged with protecting and growing client assets is responsible to learn how to protect against these serious and growing risks.

Investors are aware that something is deeply wrong with the global economic system. It’s time for the investment community to step up to the challenge. The old strategies are no longer working.

National security pros are aware that of the absolute correlation between American economic strength and our ability to defend our nation. It’s time for these professional to recognize that our enemies’ threat doctrine is targeted against our economy and what we can do to respond.

The NSIC Institute is not just offering a simple seminar. We will bring together the best and brightest from both communities in cross-disciplinary training to foster ongoing research and dialogue. Our nation’s future demands it.

PURPOSE
We will provide training and credentialing for investment professionals regarding the risks of financial terrorism and economic warfare, as well as, uncovering potential opportunities to invest in America’s future. These credentialed advisors should then be better prepared to protect and grow client investments with enhanced knowledge and specialized research.

We will provide training for national security professionals regarding the reality that our economy and security are linked. Enemies of the United States have targeted our financial markets and economic infrastructure and a new generation of leaders will be required to protect them.

PARTNERS & RESOURCES
Secret Weapon: How Economic Terrorism Brought Down the U.S. Stock Market and Why it Can Happen Again, by Kevin Freeman

Kevin Freeman is considered one of the world’s leading experts on the issues of Economic Warfare and Financial Terrorism. He has consulted for and briefed members of both the U.S. House and Senate, present and past CIA, DIA, FBI, SEC, Homeland Security, the Justice Department, as well as local and state law enforcement. His research has been presented in critical DoD studies on Economic Warfare, Iran, and Weapons of Mass Destruction presented to the Secretary of Defense and the Under Secretary of Defense, Intelligence. He has traveled extensively with research trips to Russia and China and throughout Europe and the Americas. He is also a Senior Fellow at the Center for Security Policy and a Contributing Editor to The Counter Terrorist magazine.

Kevin Freeman has been in the investment business since 1982, first as a research analyst for an advisory firm, then as author of his own investment newsletter. From 1990 through 2000, he helped develop and build the Templeton Private Client Group. From 2000 through 2003, he served as Chairman of Separate Account Solutions, Inc. He founded Cross Consulting and Services, LLC in 2004 and launched Freeman Global Investment Counsel in 2006

“Game Plan: How to Protect Yourself from the Coming Cyber-Economic Attack,” Regnery, Washington, DC, January 2013, 300 pages.

“Secret Weapon:  How Economic Terrorism Brought Down the U.S. Stock Market and Why It Can Happen Again,” Regnery, Washington, DC, January 2012, 256 pages.

“Economic Warfare: Risks and Responses, Analysis of Twenty-First Century Risks in Light of the Recent Market Collapse,” June 2009. This 102-page report reviewed in detail the background and timeline of the 2008 market collapse and provides and supports a hypothesis that the collapse was a targeted result. The report identifies specific vulnerabilities that may have led to an economic attack. The report also provides detailed insight into potential suspects using a motive, means, and opportunity methodology. It further identifies future risks and provides specific policy recommendations designed to reduce those risks.

“Economic Warfare Threat Exposed by Recent Market Turmoil,” December 2008. This white paper was prepared for a group within DoD and had circulation among the defense and intelligence communities. It identified specific potential economic vulnerabilities and discussed the risks of financial terrorism.

“Investing in Separate Accounts.” McGraw-Hill; New York, NY, March 2002, 253 pages. This is the first book published for investors regarding the rapidly growing separate account industry. The book was co-authored with Erik Davidson. Back cover note from Sir John Templeton: “Kevin Freeman, as developer of the Franklin Templeton Private Client Group, built a wealth of experience and wisdom which he shares with you in Investing in Separate Accounts.” 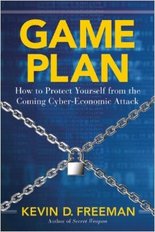 “As Kevin Freeman points out, America is facing a global economic war which has direct threats for your family, your job, and your life savings. Yet, despite his five-year effort to warn Washington, willful blindness appears to be at work, preventing our leadership from protecting you. Reading Game Plan will provide the hidden truth about the economic threats targeting you and provide you the actionable steps you should take to protect your family.”

“America’s political and military leaders may be ignoring our economy’s vulnerability to foreign attack, but our enemies aren’t. The information in Game Plan is essential for protecting your family from the devastation that economic warfare would bring. Being the messenger for this kind of warning may not be much fun, but I can’t think of anyone better than Kevin Freeman to ring the bell.”

”Kevin Freeman understands the threat of financial terrorism as well as anyone. You’d have to be negligent to ignore his timely advice about protecting your family from the economic attacks that are clearly on the horizon.”

”Kevin Freeman is a national treasure.  His ability to synthesize economic and national security is unsurpassed — and of incalculable importance in the conflict of our time: the War for the Free World.”

“While Washington sleeps, America’s enemies are amassing at the gates of our economy.  When their attacks are unleashed, everything will change in the blink of an eye.  How will you protect yourself and your family?  In Game Plan, Kevin Freeman offers an unflinching look at the very scary, all-too-real threats we face, along with cool-headed advice on how to invest with confidence in an increasingly dangerous world.  This book is worth its weight in gold.  Read it now and thank Kevin Freeman later. “

“The threat of financial terrorism is very real, and nobody knows that threat more thoroughly than Kevin Freeman. In this book, he’ll tell you how to deal with the possibility of financial collapse, and give you hope for the future, too.”