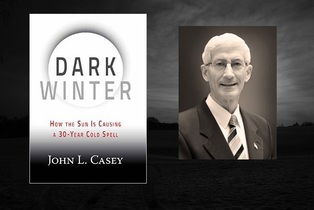 In Orlando, Florida is a lone climate researcher who, for almost eight years, has been putting the U.S. government’s best scientists and science agencies to shame, when it comes to accurately making major climate predictions. This is especially true when compared to Al Gore-style global warming politicians, government funded university Ph.D. climate scientists and the United Nations Intergovernmental Panel on Climate Change (UN-IPCC).

The UN-IPCC is the UN’s climate research arm that historians may someday remember best for unreliable climate models and associated wildly exaggerated, and erroneous temperature and sea level rise predictions. The “climategate’ scandal at the UN will likewise be prominent for the disclosure that its supposed ‘best climate scientists” falsified or manipulated climate data to fit the politically motivated manmade global warming storyline.

In March 2013, while I was the Florida Editor for the online conservative journal Watchdogwire.com, I had the chance to review the track record of this maverick in the field of climatology. When I was done I put my name on a column naming him “America’s best climate prediction expert.” I added to it in April 2014 updating his list of predictions he had made. He is Mr. John L. Casey, a former White House and NASA space program consultant, Space Shuttle engineer, and high tech start-up company executive.

His first important climate research findings were issued in a press release in spring 2007. Later his only, yet seminal, peer reviewed paper with its associated theory on climate change driven by the Sun, was published on line for all to review. It is called the “Relational Cycle Theory.” Despite a sterling background in the space program at the highest levels of the US government, in 2007 and 2008 he was nonetheless without a PhD or any climate research papers. Thus, when he issued his first climate predictions he was immediately labeled by left wing media global warming zealots and even some publicity seeking conservatives as a “scam artist,” “hoaxer,” and a “fraud.” His pronouncements of the end of global warming within a few years and the start of a new cold climate, was a message no one wanted to hear including both Republican and Democrat presidential candidates (McCain and Obama) and Nobel Peace Prize winner Al Gore, who were all saying manmade global warming was a real threat. The timing on John’s first predictions could not have been worse.

Many would have given up on this financially ruinous and personally punishing quest to tell the truth about the climate. Fortunately for all Americans, John did not. Over the years, John started the Space and Science Research Corporation (SSRC), wrote a leading climate book, and in 2013, began to publish the bi-annual Global Climate Status Report (GCSR). He has made well over one hundred radio and TV interviews and public presentations across the United States. He is now the most referenced climatologist on the internet regarding the next potentially dangerous cold climate.

In September 2013, the CEO of influential Newsmax Media, Chris Ruddy, was captivated by John’s first book “Cold Sun.” He decided to throw all of his rapidly growing media company’s resources behind John’s research. John’s first climate book “Cold Sun” was updated and recast as “Dark Winter.” Under “The Cold Truth Initiative” as Newsmax calls it, “Dark Winter” is now being promoted nationwide.

Three months after publication, and “Dark Winter” has reached number four on Amazon’s 100 “Best Sellers” list of climate books! See the list at by clicking here.

The books ahead of him are the typical manmade global warming books one of which is fictional. That makes John’s “Dark Winter” the number 1 best selling global cooling, and I dare say best selling ‘truthful,’ climate book in the USA. Of the top four, his is the only book written by a proven climatologist.

America’s best climate prediction expert is at last receiving the credit he is due. When will the rest of the media, the scientific establishment, and our leaders in Washington recognize this one man’s courage, skills, and his selfless mission to help our people prepare for the new long cold climate?

Congratulations to John L. Casey, a man who understands climate and climate policy better than anyone, period.