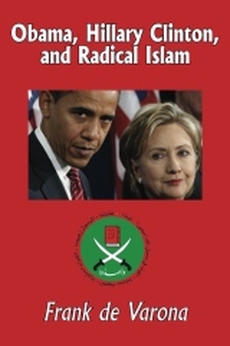 Frank de Varona is an educator, historian, journalist, and internationally known expert on politics, economics, foreign affairs, and national security issues. He has written 22 books, including five on President Barack Obama. At the age of 17, he participated in the Bay of Pigs invasion of Cuba. After the defeat, he was sentenced to 30 years in prison and served two years. After his liberation, he came to the United States and received three college degrees. He worked in the Miami-Dade County Public Schools for 37 years serving as social studies teacher; assistant principal; principal of three schools; region director; and region, associate, and deputy superintendent of schools. Frank de Varona was associate professor of social studies at Florida International University for seven years. He lives in Miami with his wife, Dr. Haydée Prado, a psychologist. He has a daughter, Irene, and a grandson, Danny.

This book discusses the reasons why the House of Representatives needs to impeach Obama and why the Department of Justice needs to indict Hillary Clinton for their Middle Eastern gunrunning operation in Libya and Syria, the Benghazi cover-up, and other crimes. It explains the history and the infiltration of the Muslim Brotherhood in the government. The history of the Islamic State and the biography of its caliph al-Baghdadi and the details of all the jihadist attacks from the one in Paris to the one in San Bernardino are covered. The book points out Obama's no-win strategy to defeat ISIS and the ongoing Christian genocide. The Armenian genocide is covered as well.

The author reveals the Saudi Arabia and Iran attacks of 9/11 and its cover-up. He exposes the increasing Islamization of America and why radical mosques must be shut down. The author presents the real Obama, who has been associated his entire life with Marxists, socialists, and radicals. The author provides an account of Obama's connections with his racist and unpatriotic pastor, Jeremiah Wright, and his friendship with the terrorist Bill Ayers, members of the Brotherhood, and with many criminals, including Tony Rezco. The author makes known the multitude of scandals that have marked Obama's life before and after his election as president. He explains that Obama is the first Marxist and hidden radical Muslim elected to the White House in history.

The author denounces the disastrous agreement with Iran and explains the criticism of others, including Israeli Prime Minister Benjamin Netanyahu. He covers the many scandals of the Clinton Foundation and Hillary Clinton's email scandal.

​The author writes about Obama's disdain towards the Judeo Christian values that make our nation great and his war against religion and Christianity. He discusses Malik Obama's jihadist ties. Lastly, the author offers specific recommendations to rescue the nation from tyranny and the road ahead for Republicans to keep the House and Senate and winning the White House in 2016. 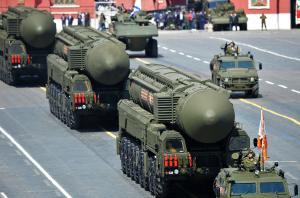 FRANK DE VARONA ARTICLES
VLADIMIR PUTIN’S RUSSIA IS A GEOPOLITICAL ENEMY OF THE UNITED STATES AND ITS ALLIES Russia has been violating the START arms treaty signed with the United States and the Intermediate Missile Agreement for some time as recognized by the Department of State. President Barack Obama has not taken any action to stop dictator Vladimir Putin as he is rapidly improving Russia’s nuclear arsenal and modernizing its weapons.Bill Gertz wrote an article entitled “Russia Doubling Nuclear … [Read More...] 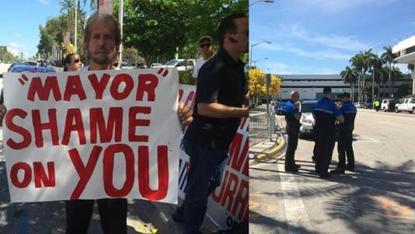 NO CASTRO IN SOUTH BEACH – THE CITY OF MIAMI BEACH OPPOSES THE ESTABLISHMENT OF A CUBAN CONSULATE
April 13, 2016 by Frank de Varona - Bear Witness Central

Miguel Saavedra, leader of the anti-communist organization Vigilia Mambisa, led a protest against the establishment of a Cuban consulate in the city of Miami Beach in front of the City Hall. The protestors took to the streets to chant, “No Castro in South Beach!”

City of Miami Beach Mayor Philip Levine is walking with a FEMA administrator and with Obama administration officials.
On April 13, 2016, the City of Miami Beach Commission met at 8:30 in the morning to consider a Resolution presented by Commissioner Michael Grieco and seconded by Commissioner John Elizabeth Alemán (who happens to be an attractive woman who is married to the son of a former minister of education in Cuba). This resolution urged President Obama to refrain from the establishment of a Cuban consulate in Miami-Dade County and specifically in Miami Beach.
City of Miami Beach Mayor Philip Levine, who without the consent of the City Commission, met with Cuban diplomatic officials during the ill-advised Obama’s appeasement trip to Cuba. The mayor told them that he wanted to open a Cuban consulate in his city. Mayor Levine was accompanied to the Havana meeting by Commissioner Ricky Arriola.
Commissioner Ricky Arriola
Commissioner Ricky Arriola is the son of the multimillionaire Joe Arriola, who was one of the 17 Cuban Americans and other Hispanics who sent the infamous letter on May 19, 2014 to President Barack Obama requesting an end to the embargo and restoring diplomatic recognition to the bloody Castro regime. The letter was also signed by 15 very powerful members of the globalist elite who are members of the Council of Foreign Relations, the Bilderberg Group, and the Trilateral Commission, among them David Rockefeller.
Approximately 200 people showed up, some of them with posters who were fiercely opposed to a Cuban consulate in the beach. Mayor Philip Levine decreed that he would allow only 30 minutes of discussion, 15 minutes to the very small group in favor and 15 minutes to the overwhelming majority of the group who opposed the consulate. Many people complained loudly yelling “More time” and many others booed the mayor’s arbitrary ruling. But the mayor ignored their pleads.
After much discussion among the mayor and the members of the City of Miami Beach Commission, the Resolution by presented by Commissioner Michael Grieco was tabled. Instead, by a vote of 4 to 3 the recommendation made by the Hispanic Affairs Commission of the City of Miami Beach which had much of the same language as the Resolution was approved.
Anti-communists leaders in Miami from the Junta Patriótica Cubana, veterans from the Brigade 2506, Directorio, MAR por Cuba, MRR, and other organizations showed up to oppose the Cuban consulate. Elected officials in the City of Miami and Miami-Dade County have previously formally opposed the idea of opening a Cuban Consulate within their borders.
With the passage of the recommendation made by the Hispanic Affairs Commission, the city of Miami Beach now also officially opposes the idea of a Cuban consulate unless serious human rights reforms are made in Cuba.  Commissioners Kristen Rosen Gonzalez, Micky Ross Steinberg, Michael Grieco and John Elizabeth Alemán voted in favor of the resolution.
Commissioner Michael Grieco and Commissioner John Alemán and the more than 90% of those present were very pleased. To his discredit, Mayor Philip Levine, Commissioner Ricky Arriola, and other one voted against banning a Cuban consulate in the city. These three Democrats support Obama’s Cuban policy.
Mayor Levine, who banned travel to Mississippi and North Carolina, has remained resolute in his personal support for a consulate in Miami Beach. He wants to increase travel to Cuba to detriment of the local economy while rejecting travel in two states! In his mind these two states commit more human rights violations than Cuba!
Earlier in this week, Mayor Levine told The Miami Herald the following: “The only reason this has happened is because you have a commissioner (Michael Grieco) who is trying to use this as a political ploy because he would like to run for mayor, prematurely. And he believes he can get the Cuban vote by appealing to their deepest level of fear and insecurity. Which is cruel. Especially when he’s not Cuban.” Mr. Mayor Cuban Americans are neither fearful nor insecure since many who came to the City Commission chambers fought bravely the tyranny in Cuba and served many years in jail as a result. The one that showed fear and insecurity was you Mr. Mayor was you and your friend Ricky Arriola who kept apologizing to the angry crowd.

Colonel Alejandro Castro Espín
The island’s repressive apparatus is assisted by the iron fist of Raúl Castro’s son, Colonel Alejandro Castro Espín, while the economy remains under the control of the lucrative military monopoly, Enterprise Administration Group (GAESA), run by Raúl Castro’s son-in-law,
General Luis Alberto Rodríguez López-Callejas
General Luis Alberto Rodríguez López-Callejas. No one can establish a factory or invest in a business without the approval of this general and without sharing its profits with the regime.
The first duty of the mayor and the city commissioners of Miami Beach is to protect its citizens as well as those in Miami-Dade County and others that may come into the area. As the Resolution that I am supporting indicated, the presence of the Cuban consulate in the city could inflame passions and create serious security risks due to possible protests and even violence.
It is totally unacceptable to reward a dictatorial regime with a consulate in the city when human rights abuses endure and democracy continues to be shunned. The Cuban regime represses its people’s freedoms and blatantly violates human rights just 90 miles from our shore. The tyrannical Cuban regime continuous to brutally repress its people with beatings, arbitrary arrests, torture, prolonged incarceration and murder of its peaceful opponents. Sadly, since these sweeping changes started in December 2014 by the president, Cubans have been beaten, arrested, and repressed at higher rates than ever before.
To sum up, I urge the Mayor and the commissioners to support the Resolution urging President Obama to refrain from the establishment of a Cuban consulate in Miami-Dade County and specifically in Miami Beach.”
Conclusion
Credit must be given to all the Cuban patriots who mobilized rapidly to stop the betrayal of City of Miami Beach Mayor Philip Levine and Commissioner Ricky Arriola, who without the consent of the City Commission or the citizens that both of them represent, met with Cuban diplomatic officials at the Ministry of Foreign Relations in Havana during the Obama’s trip to Cuba and told them that they wanted to open a Cuban consulate in Miami Beach.
Antonio de Esquivel, president of the Junta Patriótica Cubana, held a series of meetings to bring many patriots from the organization to prevent the opening of the consulate. He spoke very eloquently to enumerate the reasons why there is no need for a consulate from an oppressive regime in our community.
___________________________________________