Oleg Atbashian, a writer and graphic artist from the former USSR. 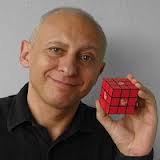 
David Horowitz said, "I hope everyone reads this book."


In 1994 Oleg moved to the U.S. with the hope of living in a country ruled by reason and common sense, appreciative of its freedoms and prosperity.  To his dismay, he discovered a nation deeply infected by the leftist disease of "progressivism" that was arresting true societal progress.  American movies, TV, and news media reminded him of his former occupation as a visual propaganda artist for the Communist Party -- a job he reluctantly held, as he knew that no intelligent person would take such art-by-numbers agitprop seriously.  Oleg is the creator of a satirical website ThePeoplesCube.com, which Rush Limbaugh described on his show as "a Stalinist version of The Onion."